So, as I wrote before, the chief priest of Syuzenji temple on Izu peninsula had adopted abandoned 8 rabitts and made a hut for them maybe some years ago though he couldn't separate the males and females completely (I heard that at least he tried but the rabbits digged the tunnel under the fence between the adjoined 2 huts) , now in 3 huts there are about 200 rabbits. Taking good care of this huge number of rabbit is very difficult and often they fight and hurt each other, thus since early summer this year some volunteers have helped the priest to take daily care of the rabbits, separated the males and females(now they live in the different huts, but soon the volunteers would need to check the sex of the babies), begun to neuter the males(the rabbits are too many and neuteing the female is more difficult so they decided to neuter only the males. But it will takes time to do all of the boys.) . I have read their web journal for months and worried about the rabbits, donated some money. And because Syuzenji is not very far from Yokohama, I decided to go there to see the situation and do some help if possible. On 8 and 9 Oct I've been there. 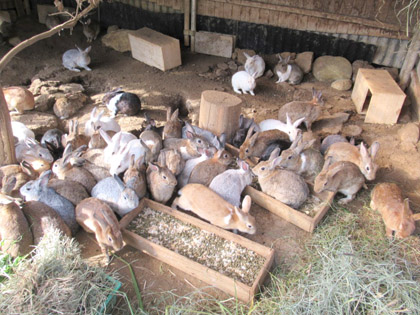