This afternoon I cleared the old bookshelves in the nook of my late grandparents' room. I found some books written in English, German and French, mostly the treatises on fiber for my grandfather was a professional about fiber or spinning ( I myself don't know the details...). He had studied in New York then Berlin around 1920 - and I haven't known it well until recently. When he was alive I knew he had once lived in foreign countries but I was too young to be interested in his life then, now I really regret not asking him about it because I have really little knowledge about his life in America and Europe. Today I found his addresses in New York and Berlin from the note on the endpapers of those old books, I'd like to visit there someday.

And I also found many travel guidebooks of Britain, France, Germany and other European countries. I'm not sure if he had really visited those countries during his stay in Germany but it's really interesting to see those guidebooks published in the early 20th century. 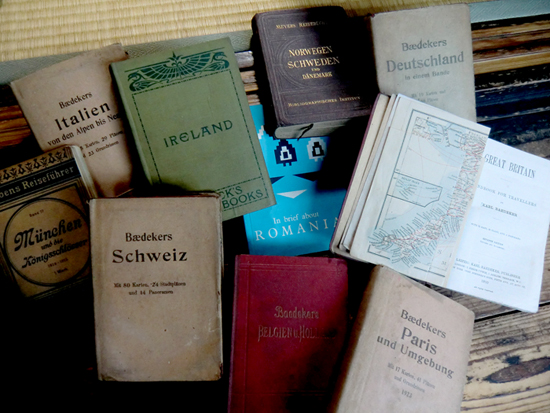 Even nowadays it's not easy to live in foreign countries, or just visit them. I wonder how he felt in NY or Berlin in the days with little information about foreign countries... But he was in his twenties then and seemed to have vivid curiosity and energy. Maybe having such grandfather is one of the reasons why I've been always attracted to Western countries.
Collapse